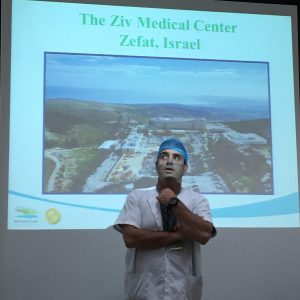 When I took the Hippocratic oath in medical school, the last thing I expected was to have my understanding of it redefined a quarter-century later, on the border of Syria and Israel. But that’s exactly what happened when I stopped to tour the Ziv Medical Center in Zefat as part of an organized tour of women from the United States.

Ziv physicians and staff are quietly caring for more than 1,000 Syrian refugees this year who suffer horribly from high-velocity gunshot wounds at close range in their stomachs and limbs; botched amputations; loss of organs like eyes, ears and kidneys; extreme starvation; and severe neglect. Wounded refugees are brought to the Syrian border by Free Syrian Army soldiers, and escorted by soldiers of the Israeli Defense Forces (IDF) 30 kilometers to Ziv.

Ran Katz MD is one of those physicians. A surgeon educated at Hebrew University of Jerusalem, Hadassah Medical School and Hadassah Ein Kerem, he now is the Director of Urology at Ziv Medical Center.[1]

His stories are stunning: a 27-year-old woman with flank pain who had seven children via multiple cesarean sections, and recent surgical removal of an ovarian cyst in Syria. Turns out her ureter (the tube from kidney to bladder) was tied in a surgical knot at the latest surgery by mistake, leading to the near total loss of her kidney from the backup of urine. Dr. Katz removed the surgical knot and she returned, healthy, to Syria.

Half of the intensive care unit is filled with Syrians. I talked to four of them, through a social worker who translated their Arabic to English. An American colleague, fluent in Arabic, next to me validated most of the translation, though there were a few inconsistencies when the refugees were describing their desire for democracy. Yes, an armed guard stands vigil outside of their hospital door, but inside the refugees are happy to be receiving outstanding medical care at no cost. Maybe they have no choice, but as I listened to their remarkable stories of limbs and eyes and hearing being saved by Ziv, I thought: This is the Hippocratic oath in action.

What do the Syrian refugees want? Freedom. Healing. Then to return home as quickly as possible to their families in Syria.

At a time when President Trump’s decision to recognize Jerusalem as the capital of Israel is arousing new tensions, it is humbling to witness this show of humanity, in the corridors of a hospital open to all.

Dr. Ran Katz embodies the Hippocratic oath as an unassailable moral guide to his work. The oath is an expression of ideal conduct for the physician:

I swear to fulfill, to the best of my ability and judgment, this covenant: I will respect the hard-won scientific gains of those physicians in whose steps I walk, and gladly share such knowledge as is mine with those who are to follow.

Ziv Medical Center is a government-owned hospital affiliated with the Bar-Ilan University Galilee Faculty of Medicine. It opened in Zefat in 2011. Ziv has been treating civilian victims of violence since it opened, along with wounded Israeli soldiers, in a longstanding working relationship with the IDF. I was heartened to learn that it is “the policy of the Israeli government to offer treatment to Syrian civilians who are brought from the border. This allows the hospital to accept adults and child patients wounded in Syria and provide them free medical treatment.”[2]

Dr. Katz didn’t always feel so magnanimous about taking care of the wounded from enemy territories. Twenty-five years ago, during his fifth year of medical school, Katz had an epiphany. He was working as a surgeon in the Intensive Care Unit at Hadassah Hospital and found himself caring for a man rumored to be a terrorist who had crossed the border into Israel from the Jordan Valley and attacked IDF soldiers and civilians before getting shot. The man was transferred to Hadassah hospital where he underwent surgery. Katz worked long hours saving a man’s life. Katz then had a moment of hubris. Why was he treating a terrorist instead of an Israeli citizen, a man who would leave for Jordan only to attack more Israelis? He asked his supervising physician why he had to care for a terrorist. The supervising physician paused for a beat and said, “You are thinking of the terrorist who died last night. You are taking care of Palestinian technician who was injured when he was fixing a machine.”

That moment stopped Dr. Katz in his tracks and regalvanized his commitment to take care of all patients regardless of homeland, religion or creed.

This year Ziv Medical Center received a Genesis Prize to expand its humanitarian efforts to care for Syrian refugees, particularly children with hearing loss. Genesis Prize Laureate Anish Kapoor said the following at the time of his selection: “Jews understand the horror of being forced from our homes. Jews understand, perhaps more painfully than anyone else, how it feels to be ‘the others.’ I want to show young Jews that together we can make a real difference for the displaced.”

Kapoor added: “I believe the refugee crisis is the defining challenge of our age, and all of us, Jews and non-Jews, have a moral obligation not to be silent in the face of this great tragedy.”[3]

The Hippocratic oath is a powerful show of humanity that cuts through political and ideological barriers and distortions. I left Ziv Medical Center feeling newly inspired to do the right thing, especially when it’s difficult or inconvenient. At the end of the day, we are all human, deserving of excellent medical care as a basic human right.

Dr. Katz treats Syrian refugees because it’s the right thing to do. I agree.