I hear these complaints on a daily basis from my patients, many of whom struggle to keep their conditions under control with medications such as steroids, anti-inflammatories, pain killers, and the like. Most of my patients are surprised to learn that their conditions are actually symptoms of an underlying autoimmune disorder originating in their gut!

You’ve probably heard the term “leaky gut syndrome” by now. Yes, I agree, it sounds awful, but as we take a closer look at how our immune system operates, you will understand why it is called this and why Hippocrates proclaimed some 2,000 years ago, “All disease begins in the gut.”

Discover the root cause of autoimmune disorders–it’s not what you think!

Just Me, Myself, and I

Scientists have identified over 100 different autoimmune conditions, and this list continues to grow. Some of the well known autoimmune diseases include rheumatoid arthritis, celiac disease, lupus, thyroiditis, multiple sclerosis, type 1 diabetes, alopecia, psoriasis and eczema. These diseases and disorders all share a common root cause: an overactive immune system that destroys the body’s own tissues. 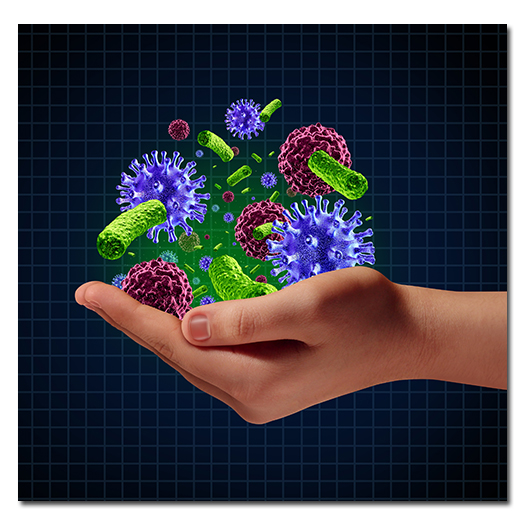 A healthy immune system creates antibodies against anything it deems as foreign, such as bacteria, viruses, and large particles that aren’t normally found in our bloodstream. During autoimmunity, the immune system fails to recognize its own cells and mistakenly produces antibodies against its own tissues, also known as autoantibodies. This leads to chronic inflammation and tissue destruction, pain and loss of function.

In fact, what distinguishes one autoimmune disease from another is simply the part of the body (the type of tissue) that is under attack. For example, rheumatoid arthritis involves an autoantibody attack against the joints, whereas celiac disease involves an autoantibody attack against the intestinal cells. Regardless of the particular disease, the underlying cause is an overactive immune system, which explains why autoimmune disorders are commonly treated with steroids and other immune-suppressing medications. But why in the world would our immune system turn against us? The answer, my dear friends, is a leaky gut.

Leaky Gut is a Party Pooper

The gut wall (that is, the lining of the intestines) is made up of a single layer of tiny cells which allow nutrients and water in while keeping bacteria, large proteins, and other toxins out. You can think of the gut wall as the bouncer of the body, giving access only to those worthy of entry while keeping the trouble makers and the “bad guys” away. Nobody likes to think about it, but the intestines are a pretty toxic place. We inadvertently swallow oodles of toxins on a daily basis, which is why a healthy gut wall is critical to maintaining strong immunity and overall good health. Apparently Mother Nature thought so too when she placed about 70% of our immune system in and around the gut wall! (1)

In other words, the toxins that ordinarily stay in your intestines until they’re pooped out “leak” into your body, triggering inflammation in the tissue surrounding your gut wall. Over the short term this isn’t such a big deal, since our immune system is designed to handle short breaches in security. But over the long-term the immune system becomes overwhelmed, allowing toxins to sneak into the bloodstream, and “troll’ our systemic circulation. Through a process known as translocation, these toxins can travel to virtually any part of the body and incite an inflammatory immune response wherever they land. (2) This, my friends, is autoimmunity.

Dr. Alessio Fasano’s discovery of zonulin (an endogenous molecule) marked a turning point in our scientific understanding of autoimmune disease. (3) With evidence that the intestines naturally mediate their own permeability by releasing zonulin from the gut wall, researchers were finally able to gain a deeper understanding of what causes a leaky gut. As it turns out, a lot of different things can trigger this condition, such as certain medications (i.e., NSAIDS and steroids), chronic stress, alcohol, and certain foods. (4) However,

two main triggers have been identified to produce zonulin and are thought to contribute to increases in intestinal hyperpermeability in everyone who has a gut wall (not just people with autoimmune disease). (3) (5)

The two main triggers for a leaky gut are:

A New Theory of Autoimmune Disease

According to this theory, autoimmune diseases can be stopped (or better yet, reversed!) if at least one of the three factors in this trio is removed. Until scientists can figure out how to remove our genetic predisposition to disease (don’t hold your breath for this one), we are left to address and heal our leaky gut on our own. And I’m committed to helping you do that.