When your body is healthy, you have a powerful army that defends you against invading bugs and foreign particles, such as viruses, bacteria, and parasites. That army is your immune system, and it polices your gut and blood stream for anything it deems foreign. Your immune system is a complex network of specialized cells and organs that work hard to differentiate between self and “non-self”—that is, between what’s you and what’s not.

Your immune system’s main weapon is to make antibodies against germs and large particles. Unfortunately, your army can sometimes mistakenly identify your own cells as foreign. This is called autoimmunity, in which the immune system fails to
recognize its own cells and produces antibodies against its own tissues, also known as autoantibodies. It’s like war on yourself, with your immune system on one side, and your healthy cells on the other side. Autoimmunity leads to chronic inflammation and tissue destruction, pain, and loss of function. While many more people have autoimmunity, approximately 100 million progress to have autoimmune disease, which is the point at which you have tissue destruction and measurable signs of disease.

Are holes in your gut causing chronic inflammation?

Sadly, the number of people with autoimmune disease has risen dramatically in the past decade, as the number of individual autoimmune diseases has risen to more than 100. Conservatively, autoimmune disease affects more than 5 percent of the population in Western countries, and disproportionately affects women [1]. While researchers are unclear on the exact reason why women are more vulnerable to autoimmunity, the leading hypotheses suspect a complicated interplay of genetic, hormonal, nutritional, stress, and other lifestyle factors [2]. See the illustration for a small representative list of common autoimmune disease. What distinguishes one autoimmune disease from another is simply the part of the body (the type of tissue) that is under attack. For example, Hashimoto’s thyroiditis targets the cells of your thyroid. Multiple sclerosis attacks the myelin of nerve cells. Rheumatoid arthritis involves an autoantibody attack against the joints, whereas celiac disease involves an autoantibody attack against the intestinal cells. Regardless of the particular disease, the underlying cause is an overactive immune system, which explains why autoimmune disorders are commonly treated with steroids and other immune-suppressing medications. 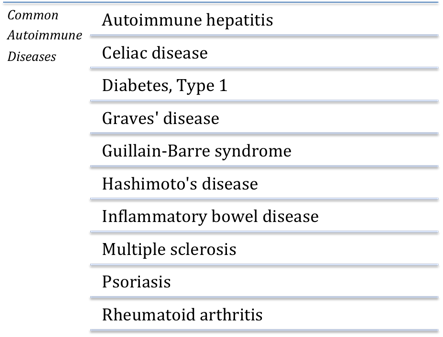 Leaky Gut as the Basis for Autoimmune Disease

The gut wall (that is, the lining of the intestines) is made up of a single layer of tiny cells which allow nutrients and water in while keeping bacteria, large proteins, and other toxins out. You can think of the gut wall as the bouncer of the body, giving access only to those worthy of entry while keeping the trouble makers and the “bad guys” away. Nobody likes to think about it, but the intestines are a pretty toxic place. We ingest toxins on a daily basis—from the margaritas we sip to the very air we breathe—which is why a healthy gut wall is critical to maintaining strong immunity and overall good health. Apparently Mother Nature thought so too when she placed about 70% of our immune system in and around the gut wall!

Ordinarily, the toxins that remain in your intestines “leak” into your body, triggering inflammation in the tissue surrounding your gut wall. Over the short term this isn’t such a big deal, since our immune system is designed to handle short breaches in security. But over the long-term the immune system becomes overwhelmed, allowing toxins to sneak into the bloodstream, and “troll’ our systemic circulation. Through a process known as translocation, these toxins can travel to virtually any part of the body and incite an inflammatory immune response wherever they land. 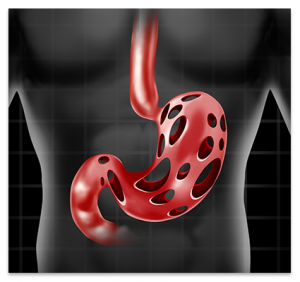 Over at the Massachusetts General Hospital of Harvard Medical School, Dr. Alessio Fasano’s discovery of zonulin, an endogenous molecule, marked a turning point in our scientific understanding of autoimmune disease [3]. With evidence that the intestines naturally mediate their own permeability by releasing zonulin from the gut wall, researchers were finally able to gain a deeper understanding of what causes a leaky gut. As it turns out, a lot of different things can trigger this condition, such as certain medications (i.e., NSAIDS like ibuprofen or steroids), chronic stress, alcohol, and certain foods. However, two main triggers have been identified to produce zonulin and are thought to contribute to increases in intestinal hyperpermeability in everyone who has a gut wall, not just people with autoimmune disease.

The two main triggers for leaky gut are:

That’s a bellyful of reasons to rethink that your food choices today, and to avoid the gluteny “cheat” of baked goods or beer. Why? They poke holes in your gut.

Approximately 90 percent of the population struggles with the low-grade inflammation that leads inexorably to problems like autoimmune disease, accelerate aging, obesity, diabetes, and other serious problems. Most conventional medicine approaches are aimed at masking symptoms, not addressing the true cause.

When I get intensely focused on a project, as I am prone to do, and start to neglect my health, one of my more well-balanced sisters says to me, “Chill, Winston!” The same could be said to your inflammasome.

There are many ways to prevent and reverse leaky gut, dysbiosis, and autoimmunity. In functional medicine, that means identifying the root cause, particularly the food and lifestyle triggers. Then you swap nutrient-dense and healing foods for the toxic foods, and do the same with lifestyle redesign.