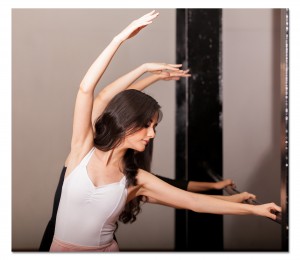 I’m at an age—perimenopausal—where it can seem like no amount of exercise makes a difference. Like you, I don’t have a lot of time. I need efficiency. So you can trust me when I tell you the punishing barre fitness classes that are all the rage right now actually work. In fact, barre fitness is my preferred exercise in my New York Times bestseller, The Hormone Reset Diet.

Barre 3, Physique 57, The Bar Method, Pure Barre, The Dailey Method, Barre Fusion, and Bar-bie Barre (ok, I made that one up!) are just a few of the many trademarked classes that offer a total body workout combining elements of ballet, pilates, and strength training in a single class. Grounded in kinesiology, the work of dancer Lotte Berk, and core alignment principles, most barre classes strive to offer a workout that combines ballet barre work, core conditioning, yoga, and weights designed to strengthen, tone, and lengthen the entire body to produce quick physical results and balance in the body. There’s a heavy focus on the legs, gluteals, and core. Be prepared to make tiny movements with tiny weights, repeated over and over. And over.

The butt (whoops, sorry, newbie mistake… “seat”) work will make you understand why some call barre the “Ass Class.” You will tuck until tuckered out.

When I first started at The Dailey Method in Piedmont, it felt a bit Stepford Wives. That is, I was surrounded by blindly conforming women who were subservient to the teacher and seemed zombie-like. Then I realized I was making excuses that would result in my kimono arms staying the same. So I dove in with both sticky feet, and rather loved it.

Why I Became a Believer

I’ve been a barre-ista for a while now. I love it. It’s burst training, or high-intensity interval training but using your own body for resistance and light weights, not huge medicine balls or 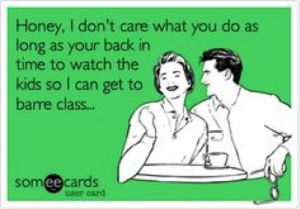 tires. My arms are noticeably more awesome. (Note: there’s a weird puffy thing that happens in the area of your triceps after 40, and you want to prevent or reverse it as soon as possible). Some describe the thigh chiseling as miraculous, and I can’t quite say I’ve noticed miracles. There’s the promise, repeated often, of developing a “dancer’s dent.” Mine is curiously missing despite hours of dedicated practice. Perhaps it’s my endless daydreaming during class of why it feels so wickedly good, and why it’s uniquely good for the female form?

My posture, compromised by the last three years sitting at my computer and writing in praying mantis position, has been vastly improved. I’m taller, less inflamed, and my pelvic floor is happy.

The Travesties of the Aging Female Form

As an OB/GYN and a mother of two, I am board certified in everything that can go wrong with the female body. The decline of the butt muscles with age. The fallout after carrying a small basketball in your uterus for nine months. The core that never quite gets reclaimed. Barre method exercises address these travesties and more.

If you’re like me and have a well-developed inner saboteur that’s coming up with multiple reasons why you don’t need to try barre fitness, I get it. Make it easy. Download a video onto your laptop or iPad, and try it at home.

I appreciate seeing pregnant women in class, many of whom sport better arms than me. Many of the instructors know about things that can happen during pregnancy and can help prep or heal those particular muscles.

My favorite part of barre class is the heightened, precise focus. It reminds of me of Transcendental Meditation classes that I took in college. There’s so much attention paid to the corset of your abdominal muscles and whether to use a “neutral” or “tucked” position for the low back, that you can’t perform the usual multitasking. There’s no remaining bandwidth for grocery lists or schedule rumination. You focus so hard on your micro movements of the arms, or your plank pose, or reverse pushups, that you emerge, one hour later, as if you’ve been on a silent meditation retreat.

Spoiler alert: My favorite part is the shaking leg muscles. Yes, you CAN always go lower! Want to hear more about why that’s good for you? Watch for part 2 of my barre fitness series. See you in class.