I just spent a few days with my older daughter in a remote area near Point Reyes National Seashore – one of our national parks.

We hiked each day, attended yoga class (where she did her first handstand!), and learned a ton at Drakes Bay Oyster Company, a fourth-generation oyster farm that leases land from the National Park Service. It was awesomepants.

I wasn’t expecting to visit Drakes Bay Oyster, but when I asked my daughter to rank order all the options for how to spend our time – including kayaking, visiting Drakes Oyster Farm on the way to Point Reyes Lighthouse, going to the beach, checking out tide pools, and getting a facial – she surprised me by ranking the Oyster Farm high on her list.

Last Tuesday, we hit the road to Drakes. 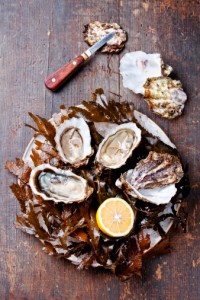 We arrived to find a group of 10 home-school kids getting a demo and teaching lesson from Ginny Cummings, the farm manager. We listened in as Ginny described the health benefits of eating oysters and the eco-friendly practices they use to farm oysters without hurting the environment.

I already knew that oysters are the richest source of zinc, which is crucial to your ability to make testosterone – the hormone responsible not just for sex drive and vitality, but also for keeping you confident and lean. In fact, oysters are the best source of nutritional testosterone, and Napa cabbage is a distant second place. Not only are oysters a hormonal powerhouse and “sea superfood,” but they’re also packed with protein, heart- and brain-healthy omega-3 fatty acids, and they’re low in saturated fat.

Little did I know that the story of how the National Park Service is trying to get rid of Drakes Bay Oyster Farm would galvanize me into action. The current controversy is this: Drakes exists in waters that Congress has designated as marine wilderness, and a 1976 federal law holds that the area would be free of commercial activity once the lease expired on the land – which was in 2012.

The owners are making a last-ditch attempt to get the U.S. Supreme Court to extend the lease, but environmental groups and federal courts aren’t backing down.

You know me. I’m a Berkeley girl with a green heart. I’m all about preserving wilderness and protecting natural resources. But this historic oyster farm provides local jobs, sustainable food products, and engages in environmentally friendly practices. The real kicker is that the Park Service is misrepresenting the legislative history of Point Reyes National Seashore and using false charges of environmental harm against this family business.

In November of last year, the San Francisco Chronicle reported that Drakes oyster farming efforts have also helped the SF Bay oyster restoration project reach a huge milestone: 2 million baby oysters have settled on the man-made reefs created by Drakes Bay. With an estimated 85 percent of the world’s oysters already gone, that number is a huge feat.

So if Drakes gets shut down, oyster restoration projects that help improve the ecosystem are in danger, people are out of jobs, and a sustainable business that provides a rare nutritional gem gets the ax. Needless to say, I whipped out a pen pretty quickly and signed a form letter to my congressman, petitioning on behalf of Drakes Bay Oyster Company.

What can you do to help?

Write to your congressman or Senator and let them know you support Drakes, or visit Save Drakes Bay and find other ways to lend a hand.

And in the meantime, eat a half-dozen fresh oysters to reset your testosterone and get a nutritional boost. It may not be long before they’re gone!

Low Testosterone in Women⬇️⬇️. There are a

Three hormones play a key role in the hormonal swi

Dispatch from the Airport!. Today we chatted about

The classic sign of high cortisol is feeling tired

I was an emotional eater. Food comforted me when I