I’m devoting this entire article to the joys of yoga.

“Why?” you ask (as if you didn’t know that I’m a dedicated yoga teacher as well as a physician). There’s no better way to have more resilience, flexibility and healing power than with a yoga program. And besides, I believe in using yoga to cultivate your most vibrant vitality. While planting my organic dye garden several years ago, I banged my little toe. Ouch! (or more aptly, #@&%!) Probably not broken, but my first thought was, “What about my rockin’ yoga habit?”

What to do when injured? Practice Yin Yoga… 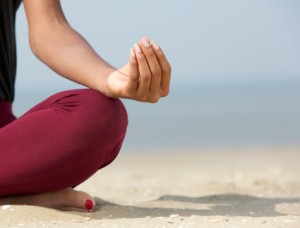 From healing injured shoulders to little toes, yin yoga is the answer. Yin Yoga was developed in the Taoist lineage in Ancient China. It’s based on passively-held yoga asanas (common postures), usually seated, that work the trunk, hips and legs. You hold these poses for 5-10 minutes. And you will be amazed at how these asanas unblock your chi flow through the meridians of your body, which happen to run through the connective tissue of your body. Connective tissue is where the action is – it’s what is worked, nourished and hydrated by Yin Yoga, and it’s where injuries are healed by the action of fibroblasts and your immune system.

The world is blessed with Sarah Powers, a leading yoga teacher (who used to be based in Marin). She teaches a combination of yin and yang practices and finds that yin prepares the body optimally for more invigorating yang practices. Check here for audio interview downloads with Sarah on Yin Yoga, and here to see her schedule. Sarah is a busy mama yogini, and teaches all over the world. Go work with her at Hong Kong or Jakarta, or go more stateside in Napa, Seattle or Indianapolis. 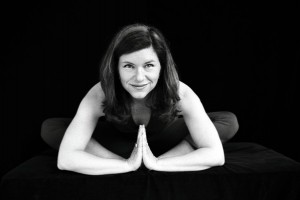 But, I have no time!

Sarah recently taught that if you are short on time, sit in baddha konasana (see my photo by Angela Lang) with the bottom of the feet together, and bend forward over your feet. You should rest your forehead on a block (unlike the photo), a pillow, or make fists, stack your hands and lean your head on your fist tower. This works most of the meridians and helps your flow of chi.

Two other great contributors are Paul and Suzee Grilley. Here are few of Paul’s thoughts: Yin Yoga is not “yet another” brand name of Yoga postures, it is part of a larger conception of Yoga that can be called Taoist Yoga. The fundamental tenet of Taoism is that all things can be described by their mutually complementary Yin and Yang aspects. Yin and Yang can be used to describe all things we are capable of experiencing whether they are clouds, stars, forests, our thoughts or our bodies. And here’s a little more… Basic examples of Taoist analysis would be: There is always a front and a back to a coffee cup but we can never experience both at the same time. The exposed part of the cup is Yang, the concealed part is Yin but both are necessary to form the cup. Or consider the fact that inhaling and exhaling are opposite movements. Inhaling is Yang, exhaling is Yin but together they are the “Tao of Breathing.” A Taoist analysis of Yoga practice emphasizes the critical difference between Yin and Yang tissues of the body. Muscles and blood are Yang, connective tissues and joints are Yin. Yin and Yang tissues do not respond to training in the same way and a student’s practice becomes more effective when the difference is understood. Go on… Most forms of Yoga practiced today are Yang, they emphasize muscular movement and contraction. By contrast Yin Yoga targets the connective tissue of the hips, pelvis and lower spine. Yin postures are held three to five to ten minutes at a time. This type of practice complements the more muscular styles of Yoga and is a great aid for learning to sit in meditation. Paul has several helpful DVDs, which are available on his website. Try Yin, especially when injured. I especially recommend Yin for adrenal dysregulation. Your bones, joints, tendons, ligaments, fascia, and other “yin” elements of your body will thank you with abundant healing. Something you will appreciate and want to keep in mind all year long.