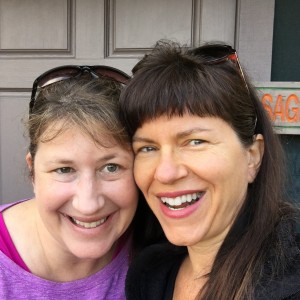 The beginning of 2017 is almost over, so by now you can know where you stand on your New Year’s resolutions. For most people, the energy of resolutions has already waned by end of January.

Personally, I get tired of resolutions as a tasked goal. Sometimes they work, but usually they don’t. Instead, I prefer what my friend Jo and I do every new year: We choose one guiding word for the year. We find it’s more effective to use a word as a resolution instead of the all-too-common and tired plan of “lose weight,” or “be more present for my kids.”

This year, Jo’s word is essentialism. Know what that is? I didn’t either.

It means, simply: “Do less better.”

I love that it can mean both “do less, but better” and “do less well.”

I was leaning toward “playful” as my word but I like her word better, because I imagine I can be more playful if I do less better.

Jo got inspired by a recent book she read by Greg McKeown called Essentialism.

“Want to borrow the book?” she asked.

Why try essentialism? Why adopt it as your word this year, instead of a resolution to drop 10 pounds?

Essentialism has its roots in Plato and Aristotle, but these ancient Greek men don’t always feel so relevant to my 21st century life. Conversely, my friend Jo feels very relevant. So does Danielle Laporte, an early mentor of mine who taught me to start a “stop doing” list, and to design my life around core desires.

I hypothesize that the disciplined pursuit of less would help reset stress hormones, make a person like me less reactive, maybe even save one’s telomeres, the protective caps on chromosomes that are an intermediate marker of aging.

I really need the disciplined pursuit of less. Now, more than ever, because my latest book campaign is in high gear. (Fingers crossed! Release date is around the corner – March 17, 2017!)

Right. I’m not exactly off to a banner year of doing less.

The old way, if you’re like me, doesn’t work. You know what I mean: The make-every-effort, push harder, be uber-productive mode that exhausts the system in charge of your hormone balance – specifically the Hypothalamic-Pituitary-Adrenal (HPA) axis – but that’s a thread for another conversation. The obsessive search for multipliers to make it all easier. I’m too serious and hard-charging for my own good.

My overkill has affected the quality of my voice in the past year. Certainly, my serum cortisol levels have confirmed this problem in the past. As you’ll read in my upcoming book, Younger, my over-efforting led to short and stubby telomeres, which indicated that I was aging twenty years faster than normal. This year, I like the idea of setting a goal other than productivity, the goal of focusing on the essential, including being playful to make it happen.

Speaking of being playful, I got to hang out with Jo last week for a puppy play date. When I asked about how essentialism has changed her behavior since choosing the word, she explained:

“I’m much more cognizant of asking myself, ‘What’s really important right now?’ It’s easy to get distracted by the unimportant but seemingly urgent.”  She added, “I’ve also returned to my anchor habits like meditation.”

Jo’s full name is Johanna Sussman Ilfeld, PhD. She is a gifted leadership coach, and my regular Sunday yoga and running buddy – I’ve written about her before as some of you might recall. (Read more about Jo’s wisdom in some of my previous blogs about happiness and preteen girls’ body image.)

Making the Change in Mindset

I used to have whiny excuses as to why I couldn’t do less better. I’d say things like:

I’m glad that Jo forced me out of my comfort zone and motivated me to step up, reclaiming my ownership of my day. Your cells listen to your thoughts and I want more “do less better” thoughts. They sound calmer, healthier.

Applying this year’s word – essentialism – to my life, I feel stable, less rushed, realistic, even calm. In fact one of my goals this year is to show you how I’m “doing less better,” It’s often baby steps, and that’s the point – again, doing less, better.

What is your word for 2017? Let me know in the comments below. Remember, you can keep tweaking your word throughout the year. No pressure to nail it down in January. Let it evolve over time. Call it step one of doing less better and regaining control of your choices on how to spend your time and energy.

Learn more about Dr. Jo Ilfeld and her awesome work as an executive leadership coach at SuccessReboot.com.