Dear Sheryl Sandberg and Lean In:

Girlfriend, your book is making waves. Important waves, but also waves that are raising my cortisol.

Sheryl Sandberg and Lean In put forth the idea is that the only way women in the workforce can reach the top of the corporate ladder is when we lean in: when we “seek challenges, take risks, and pursue goals with gusto.” She wants to keep women rising through the workforce, and to keep them from dropping out for reasons like pregnancy, family, or generally feeling like a train wreck.

I’m not sure I agree with that.

Instead of leaning in, I want us to lean out.

Break the rules.
Try something different.
Work outside the system.
Amplify flexibility and diversity.
Innovate.

If women aren’t reaching the top of the corporate structure, it’s not because of the women; it’s because of the structure. To be fair, Sheryl says its both lack of ambition and lack of support that creates a glass ceiling for women. Yet she then keeps trying to fix the women.

You’re perfectly imperfect already. You’re all smart, tough cookies – I have yet to meet a job a woman can’t do.

So instead of following the rules that force us to choose between being a nurturing mother and a savvy businesswoman…let’s change the system so that we can do both, happily.

I agree with Anne-Marie

Anne-Marie Slaughter put forth in her article Why Women Still Can’t Have It All that the idea of perfectionism – of having a serious career, kids, and a relationship all at the same time – is holding us back. That while someday it will be possible for both men and women to “have it all,” that simply isn’t possible in modern society as it stands.

We can’t be happy in the modern system because it’s not designed for us. It’s not flexible. It doesn’t value diversity. Frankly, it’s the lower, base qualities of the masculine.

Just like we can’t keep our hormones balanced in a modern lifestyle full of stress, uninformed doctors, and a tendency to get prescriptions instead of cures.

You know how strongly I feel about the importance of always finding the root cause. And the root cause of women’s unequal roles in the workforce isn’t that we have children; it’s that the system isn’t built (yet) for people who have children.

These days, I’m a doctor/mom who works from home. I write, consult, interview, skype and email sometimes until my throat is raspy and my fingers ache. But I also take my daughters to volleyball practice and play dress up occasionally. Yes, it was tough work to craft this lifestyle and I went through my fair share of research and self-discovery before I found it. Just like it was a tough road before I figured out how to balance my hormones.

Don’t get me started on the cortisol wrangling. Let’s just say there was too much of it in the broken healthcare system, where I was educated and trained, at Harvard Medical School, the Brigham and Women’s Hospital, Massachusetts General Hospital, the University of California at San Francisco, and San Francisco General Hospital.

Don’t wait for the power plug

I didn’t wait for the power to be offered to me, which Sheryl astutely frames as the latest version of the “waiting-for-Prince-Charming” fantasy.

I decided to power up at home and outside of the broken healthcare system, just as many women are fleeing the broken corporate system, or the male-dominated tech industry.

So today, I’m asking you instead of leaning in, to lean out. Lean out of the broken system and make a new, better, healthier one. Let’s reclaim our jobs, our health, our sanity, and our hormones in a way that works for us. The alternative? A life on the latest antidepressant, sleeping pill, or anxiety medication as a way of staying at the table.

Sheryl says to:
Sit at the table.
Make your partner a real partner.
Don’t leave before you leave.

Dr. Sara says to:
Leave the table and go for a walk together.
Find a partner who understands and either splits the chores or hires help.
Don’t leave before you get what you need. Then put on your tiara and run around barefoot with your eight-year-old. 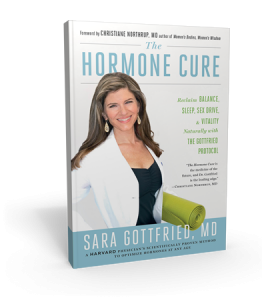 To Lean OUT a bit more and rock your cortisol, buy my book. It’s the #2 Amazon bestseller! http://thehormonecurebook.com