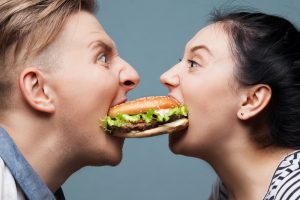 eptin resistance is when your cells become numb to leptin, the hormone of hunger and satiety—that is, nature’s appetite suppressant. Under normal conditions, when you’ve had enough to eat, leptin signals your brain to stop eating, i.e., it’s time to put down the fork.  When your brain gets bombarded with high leptin levels signals, it shuts down from overwhelm and you feel hungry most of the time. Leptin levels keep rising, receptors stop functioning, your body doesn’t get the leptin signal, and you don’t feel full. Most commonly, you keep eating the wrong foods in an addictive pattern, and you keep gaining weight because high leptin causes weight gain and excessive hunger.

This is the Self-Assessment that I use for Leptin! (See The Hormone Reset Diet, page 100-102, for further details.)

Do you have or have you experienced in the past six months . . .

In order to make your leptin work properly, your body needs to traffic it around freely. However, when your triglycerides are high, they block the leptin message in the brain. It’s like loud music. Triglycerides keep your brain from being wise about food; the music is blaring. The only way to let the leptin move freely around your body is to lower your triglycerides, ideally to less than 50 mg/dL. However, a good start is ﬁrst lowering them to less than 100 mg/dL. Additionally, leptin resistance affects your immune and reproductive systems. When your immunity suffers, chronic inﬂammation develops. Leptin is a major player in the low- grade inﬂammation that won’t turn off in people who are overweight or obese. Leptin resistance also impairs fertility and weakens your bones. A leptin imbalance can cause joint pain and damage because too much leptin accelerates the breakdown of cartilage in your joints. The level of leptin in your blood corresponds to the level in your joints: the more leptin, the more potential joint damage.

How Do Diet-conscious Women End up with Leptin Resistance?

Often leptin resistance is initiated by insulin resistance, although the mechanism hasn’t been conclusively shown. If insulin goes unchecked for too long, it’ll flip the switch on leptin too. High insulin levels make your ovaries secrete more testosterone. Your cells also produce more bad estrogens, and you become leptin resistant. Both insulin and leptin resistance can be caused by stress, excess carbs, genetic predisposition, and insufficient physical activity.

Even normal-weight women can have a problem with leptin, a problem known as being “skinny fat. In medicine, it’s called normal weight obesity, a term used to describe the one in four normal- weight individuals with increased fat mass. Skinny fat is a problem of body composition: you have too much fat mass relative to muscle mass, and the fat could be making you sick. Let me give you a visual. Skinny fat women look thin but have very little muscle deﬁnition. They may look good in a T- shirt, but when naked, the belly appears doughy. When you touch their skin, you sink into fat rather than feel the ﬁrmness of muscles in the space between their skin and bones. They are thin  people who are actually high in fat mass, especially around the belly, and low in muscle mass. They are at risk of the same kinds of diseases as obese  people: prediabetes, diabetes, heart disease, and metabolic syndrome. [1]

How Many Women Are Leptin Resistant?

In my practice, I found that between 60 and 70 percent of overweight women were leptin resistant. They had a “hunger hormone” problem, not a problem of willpower. Leptin resistance is at the heart of carbohydrate cravings, increased hunger, and overeating— and paradoxically it results in your brain thinking that you’re starving. It’s like a broken thermostat. Your system keeps sensing the room is cold, even when it’s hot. When it’s functioning optimally, leptin can be a dieter’s best friend because it normalizes appetite and reverses fat storage. But when it’s not, it can become your worst enemy.

How Does Leptin Affect Thyroid Function?

Leptin resistance is associated with greater inflammation in the body, as measured by higher levels of hs-CRP (high sensitivity C-reactive protein). Leptin also correlates higher TSH and with metabolic syndrome. Sometimes, the TSH in leptin resistance is in the upper range of what conventional physicians consider euthyroid. I recommend a TSH < 2 and reverse T3 in the lower half of the normal range for your lab.[2]

How Quickly Do Women Lose weight?

Within the first week, I usually see 2-5 pounds lost if leptin resistance is the root cause. I’m not a fan of fad diets or rapid weight loss. My goal is slow, steady, and sustained weight loss in women who are overweight. Thyroid takes 6-8 weeks to reach a new level of homeostasis.

High levels of leptin harm your joints, independent of obesity. That’s because leptin is a mediator in the progression of osteoarthritis. Leptin literally breaks down cartilage by increasing the production of metalloproteinase (MMP) enzymes, and contributes to apoptosis (programmed cell death) in chondrocytes. (Chondrocytes are the cells that produce cartilage and then becomes embedded in the cartilage matrix.)[3]

Some people think that high leptin is simply a consequence of obesity, but one study shows that leptin elevation leads to bone and joint problems independent of obesity.[4]

Studies found high levels of leptin in the spinal tissue and joints of patients with rheumatoid arthritis. Research indicates that high or level leptin levels cause inflammation linked to autoimmune diseases.[5] This is because leptin plays a role in the activities of the immune system, so when it’s off base, the immune system gets knocked out. Overall, bloat and inflammation are signs of imbalanced hormones, especially leptin. Getting off of fructose, as I suggest in my book The Hormone Reset Diet, will cut out the bloat and help you feel more energized, less heavy and hungry, and more in control of your food cravings.

Do HIIT Help to Reverse Problems with Leptin?

Studies show that some women drop their leptin with exercise.[6] When you are resetting your leptin pathway, I recommend that you burn calories after dinner. Exercising after dinner allows you to burn extra calories and, ideally, enter a lower energy balance (calories eaten at dinner minus calories burned after dinner) for the all-important, ﬁx-my-leptin overnight fast (i.e., an intermittent fast of 14 to 18 hours). Women are extremely efﬁcient at hanging on to fat at all costs, especially after age 40. One study showed that overweight men and women respond differently to exercise on a treadmill.[7] Men show no change in their metabolic hormones, and women increase their ghrelin, the hormone that raises appetite.

Just remember that vigorous exercise very close to bedtime can interfere with your sleep. At least two hours before bed, go for a brisk walk, practice twenty minutes of yoga, take a quick swim, do ﬁve sun salutations, or attend a barre ﬁtness class.

For more information on leptin and how to reset it, pick up your copy of The Hormone Reset Diet.