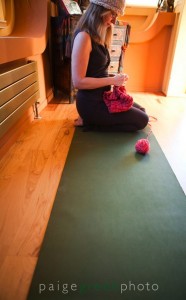 Love this idea from neuroscientist Kelly Lambert, PhD’s book on depression, about choosing alternatives to the conventional quick-fix of changing your neurotransmitter mix with a prescription for Lexapro, Prozac or Wellbutryn or some new pill.

“Lambert shows how when you knit a sweater or plant a garden, when you prepare a meal or simply repair a lamp, you are bathing your brain in feel-good chemicals and creating a kind of mental vitamin. Our grandparents and great grandparents, who had to work hard for basic resources, developed more resilience against depression; even those who suffered great hardships had much lower rates of this mood disorder. But with today’s overly-mechanized lifestyle we have forgotten that our brains crave the well-being that comes from meaningful effort.”

Gratitude for this info to a beloved patient, Fleur, who found it from a cool woman’s sewing blog, who credits a woman named Catherine Newman. I believe it is Catherine who wrote the paragraph above but it’s a little hard to identify from my sequence of lovely informants. Here’s Kelly’s website and a tantalizing excerpt.

I’ll end with a few words from Kelly that I happen to agree with completely.

Thanks to the relentless beat of drug marketing, many of us are confident that depression has been figured out. We “know” that the cause is a chemical imbalance and that the most effective treatment is antidepressants. Since the introduction of SSRIs, which increase the levels of serotonin between brain cells, most scientific research has focused on how these drugs, and others like them, influence depression. In fact, the depression “story” has been dominated by the role of serotonin and the theory that low levels of this neurochemical affect our moods in negative ways.

But I haven’t been able to buy into it. If these drugs are such an effective treatment for depression, why, despite millions of patients in the United States receiving prescriptions for SSRIs each year, are depression rates higher than ever? The World Health Organization estimates that depressive and anxiety disorders lead the list of mental illnesses across the globe—with 121 million people currently suffering from these conditions. They’re responsible for approximately one quarter of all visits to health care centers worldwide. In the United States, where SSRIs, are readily available (about 189 million prescriptions were written for antidepressants for approximately 15 million Americans in 2005 alone!), the Washington Post recently reported that the percentage of adults using SSRIs between 1994 and 2002 had tripled. But despite the astounding number of people on these medications, depression rates continue to rise.

When you have low thyroid function, you make more

You cannot realize your full potential in the worl

Natural solutions for PMS. I am careful not to o

Progesterone resistance and its effect in the body

How can you increase your body’s progesterone le