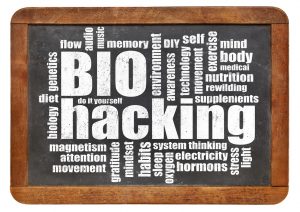 Biohacking is the method of applying targeted lifestyle changes to optimize your body’s biology. The point is to leverage every means possible—genetic, biochemical, psychological, emotional, spiritual—toward a specific goal, usually to feel your best and most productive. What differentiates biohacking from other health strategies is that it involves rigorous self-testing, such as with direct-to-consumer testing for genomics as well as blood, saliva, and urine tests, and self-monitoring technology, such as with wearables and trackers. I’m a physician biohacker, but often biohackers are citizen scientists and hobbyists who have a keen interest in health but not necessarily formal medical or scientific training.

There are larger communities throughout the United States and the world. The first group was Quantified Self, which started in 2007. Now there’s Biocurious and others like the Bulletproof conference, where I’ve been a speaker. On social media, you can use the hashtag #liveyourbestlife to find fellow biohackers and biohacking strategies. The main venues of communication are online communities, social media, virtual meetings, webinars, and in-person conferences. Going forward, I believe the main developments are the growing ranks of people interested in self-optimization, along with discouragement with conventional medicine and its lack of answers for the prevention and reversal of chronic disease.

I believe the main driver for people is to optimize the biology and then see what remains to be dealt with, not the more materialistic view that biology is the only issue.

Anyone who had dealt with a serious health issue knows there’s more than just biology to contend with. Look at addiction—it’s 50% genetic, 50% environment. Biohacking in this situation means being aware of genetic tendencies, optimizing the biological consequences (such as low dopamine) with diet and burst exercise in order to raise dopamine, and modifying behavior. But most people with addiction understand it’s a spiritual malady too, not just biology. So to me, biohacking provides more of a holistic and sacred approach than simply the biological.

Three favorite issues to biohack are stress, sleep, and blood sugar. These are issues that get only a passing interest from most busy doctors, but they are the foundation for excellent health and prevention of chronic disease. Think of these issues as key levers on your dashboard that you can move up or down to your advantage. I track my stress level daily with a wearable monitor for heart rate variability called The Wellbe. It tells me this morning that I’m 61 percent stressed. I check again after a 10-minute visualization, and see a dramatic improvement: I’m 17 percent stressed. I measure my stress levels as free and metabolized cortisol every 3 to 6 months.

Blood sugar monitoring is really important if you want to lose weight and live a long, healthy life. I check my blood sugar at home once per week, and occasionally do a “carb” test where I’ll eat 25-50 grams of a type of carb and then measure my blood sugar 2 hours later. By doing this, I’ve discovered that oatmeal raises my blood sugar too high but brown rice and bananas are fine. That’s helpful for me to keep my blood sugar normalized and not fluctuating too wildly. I also measure my blood level of hemoglobin A1C (a three-month average of blood sugar) once every 3 to 6 months.

Finally, I track my sleep with my Fitbit or Oura ring. I measure sleep onset, duration, deep, light, and REM sleep. This year I’ve been able to double my deep sleep with the use of biohacking. I’ve learned that melatonin doesn’t help me as much as phophatidyl serine and ashwagandha. Another biohack that increases my deep sleep is keeping my room 64 degrees of cooler, although it’s a nightly negotiation with my husband who likes it warmer.

Other recent biohacks involve my microbiome with the emerging technology of micro RNA testing. My husband uses biohacking to improve his road cycling performance. At age 57, he improves his time annually on his 100-mile road races. Recently he discovered with obsessive tracking that a ketogenic diet wasn’t as good for his performance as cyclic ketogenic diet, where he eats keto most of the year, but carbs up two weeks before a race. Another hack he tries to follow is the “Sabbath hack” of getting off digital once per week.

How Can We Track Ourselves?

For most of my patients, the best home tests and tracking are for sleep and stress, like the ones I mentioned: Oura ring to measure sleep and heart rate variability (HRV) – it also tracks fitness, like steps and heart rate—or the Fitbit for sleep and fitness, as well as quarterly or twice/yearly physiological tests like the DUTCH Test (dried urine test for comprehensive hormones), including free and metabolized cortisol.

A lot of people don’t realize that stress has a cost, particularly if you’re like me and get stuck in a state of high perceived stress. Cortisol literally destroys brain cells. It’s a wear and tear hormone because it wears down body cells and tears up brain cells. In the research that led to the Nobel Prize in 2009, Elizabeth Blackburn discovered that premenopausal women with high perceived stress age 10 years faster than women with a normal amount of stress, as measured by telomeres, the caps on the ends of chromosomes. I recently traveled to Israel and was struck by the way that many Israelis cope more effectively with the baseline stressor of living with hostile borders, with the possibility of missiles flying toward them at any moment. The sense of ease of Sabbath was palpable, and something that we are missing terribly in the United States. From a biohacking perspective, taking a weekly day of rest may be the ultimate biohack for stress and physiology, whether you’re religiously observant or not.

Is Intermittent Fasting a Biohack?

I’m a huge fan of intermittent fasting because it forgives so many dietary and lifestyle sins. When you look at biohacks that lengthen healthspan, the period of time that you feel in your prime, the three that are proven are caloric restriction, fasting for one to five days, and intermittent fasting. Only about 10 percent of the population can accomplish the first two biohacks, but about 80 percent or more of people can intermittently fast. I recommend it for lengthening the best of middle age (40-65) and for weight loss and management. Women benefit, but more slowly than men. I practice a 16/8 protocol five to seven days per week (i.e., I finish eating by 7 p.m., then eat again 16 hours later, around 11 a.m.), but when people are first beginning, you may need to start with a 12 to 14 hour window twice per week, not consecutive, and perform only adaptive exercise (yoga, Pilates) on your intermittent fast days.