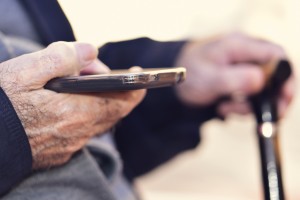 With the release of my newest book Younger, I’ve spent a lot of time recently thinking about aging. As a doctor, I not only look at the physiological external effects of aging, such as the wrinkles, hair loss, and weight changes, but also the internal changes: thinning bones, failing memory, rising inflammation, and declining mood. These are very real challenges that prevent us from feeling and looking our very best. No patient has ever told me, “I just love getting older!”

Maybe it took turning fifty this year for me to notice all the negative stereotypes about aging, but we’re saturated by them. Advertisements, health books, TV shows, and daily conversations are rife with bad connotations: old is frail, demented, helpless, incompetent, undesirable, unattractive. I’ve come to believe that these messages, unfortunately, can become self-fulfilling prophecies for the old and young alike.

My mom takes it one step further. “It’s as if we’re disappearing as older women, no longer relevant.”

Research shows that negative age stereotypes make older people feel worse about themselves and predict worse physical function, including memory and cognition. In short, bad media stereotypes about aging actually make older people even more frail and forgetful. How so? Since mapping the human genome, scientists developed an important complementary concept called the exposome—the sum of all exposures in an individual over a lifetime from diet, lifestyle, and behaviors, how the body responds to them, and, finally, how these exposures relate to health. Included in our exposome are our perceptions, attitudes, and mental responses.

Women are more affected than men by the negative messages. Look at Esquire covers in the past few years: Clint Eastwood, Robert De Niro, Donald Trump, Michael Keaton, and Liam Neeson—all over sixty. Aging men are seen as wise and sexy, role models for younger men and all of us. Women get the short end of the aging stick. That I can’t abide.

Can we undo the damage of the negativity and how it affects the exposome? Yes, we can. I discovered a fascinating study that found implicit positive age stereotypes improve physical functioning more than exercise does. How’s that? The intrepid group who did the study had previously found that showing positive age stereotypes countered elders’ beliefs about their physical function. Showing older people positive images of themselves also fed something important: their preference for more positive images.

Since their first study, these researchers have also discovered that showing aging in a positive light bypassed older people’s internalized negative stereotypes, improved their own stereotypes of aging, and upgraded their self-perception and their physical function. The authors put it best: “These findings suggest the intervention served, in effect, as an implicit fitness center.” Wow! Positive images literally improved their strength, gait, and balance. That’s the kind of positive exposure I can totally get behind.

Essentially, we must change the stereotype and create a new, more positive image. Aging can be beautiful, healthy, and strong. Let’s see more powerful, amazing women like Betty Fussell and Ida Keeling featured again in Vogue, defying the most common perceptions and attitudes about aging. I’d love to see more media images of Madonna and her peers in advertising campaigns, such as those for Versace and Louis Vuitton. We need more photos of iconic author Joan Didion, at eighty-one, considered by some to be the most discussed fashion model of 2015 (featured in an advertisement for the French label Céline).

Let’s take the initiative to age well ourselves, by adding more sleep, eating better, exercising smarter, and minimizing our exposures to toxins. I suggest hundreds of techniques big and small to improve the odds of aging gracefully in my new book Younger. We can own up to the fact that we might be getting older, but we don’t have to take it as a burden.

What other ways could we resist stereotypes and create a new concept of aging? How can we be more proud of getting older and see it as a sign of strength, admiration, accomplishment, and beauty? I’d love to hear your thoughts!