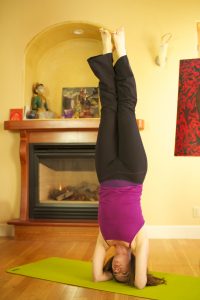 A new study of menopausal women has shown something that we’ve known for decades: that yoga helps reduce symptoms of menopause.

Read more about the study right here in a recent press release. In short, yoga was better than no treatment at reducing an aggregate of menopausal symptoms, anxiety-related symptoms, vasomotor symptoms such as hot flashes and night sweats, and vaginal dryness and pain during sex, the study found.

Here is a quick Q&A with Dr. Sara Gottfried MD about the results of the new systematic review, cited below in the first question.

Question #1. A recent systematic review in Maturitas, led by Dr. Holger Cramer, looked at thirteen randomized trials of yoga for menopause. The findings showed that yoga is both safe and effective at reducing the physical and emotional systems of menopause including hot flashes, anxiety, and night sweats. Should yoga be one of the first steps that women take to alleviate menopause symptoms?

Answer: Yoga should be one of the first steps that women take to alleviate most symptoms, whether menopausal or not. Men too. There is no prescription medication that can get you the benefits that yoga provides, so instead of outsourcing your health to a prescription start with food first then yoga. It’s no surprise that yoga helps with the physical and emotional symptoms of menopause because a complete system that is proven to reset the control system for hormones, the hypothalamic-pituitary-adrenal axis.

Question #2. Dr. Gottfried, you recommend yoga on your website and are a practitioner yourself. What do you think makes yoga so effective against the symptoms of menopause?

Answer: I’ve been a certified yoga teacher for 16 years. One reason yoga is effective against the symptoms of menopause is that it functions as a reset for the stress response system, which also happens to be the control system for hormones. Yoga has been shown to lower cortisol and inflammation, as measured by IL-6. Yoga raises serotonin. And paced respiration, in this case a five-second inhale, ten-second hold, and five-second exhale, was shown back in 1992 to reduce hot flashes by 44 percent. So the fact that yoga improves menopausal symptoms isn’t new, but the more data we have to support it, the more likely it will be accepted by mainstream medicine and practitioners.