What are the health and beauty benefits of Grounding or Earthing? How does being barefoot impact oxidation and the science of it?

Is grounding ready for prime time? Short version: I’m still waiting to be fully convinced but so far, the evidence is promising. 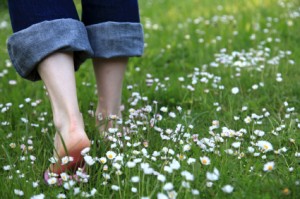 In this article, I want to review the data on the earthing/grounding phenom with the following questions in mind:  What evidence do we have that the electrical currents embedded in the earth’s surface make the dirt under your feet a giant antioxidant? Does earthing really protect the body from oxidation by supplying the electrons so the free radicals go away, don’t mutate your precious DNA, and leave you alone? Does it make your blood more like wine, less like molasses?

In Part 1 of The Earth Beneath Your Feet, I explored the purported benefits of earthing but saved the science for today’s segment, Part 2.

According to small but intriguing studies done by scientists linked to the Earthing Institute, just 30 to 40 minutes of earthing a day may provide improvements in factors that profoundly affect our health and looks – circulation and sleep improve, chronic pain may take a hike, and – important to me as a Harvard hormone M.D. – our levels of cortisol, the main stress hormone, may get to that lovely Goldilocks position. This can mean better hair, better skin.. better everything? Not so fast.

“Reduction in inflammation as a result of earthing has been documented with infrared medical imaging and with measurements of blood chemistry and white blood cell counts. The logical explanation for the anti-inflammatory effects is that grounding the body allows negatively charged antioxidant electrons from the Earth to enter the body and neutralize positively charged free radicals at sites of inflammation. Flow of electrons from the Earth to the body has been documented,” states a review article just published in the Journal of Environmental and Public Health by cardiologist Dr. Stephen Sinatra and other researchers on the board of the Earthing Institute (1).

Hmmm. Perhaps but sounds speculative to me. I’d like to see a double-blind trial where a group of people with high cortisol get randomly assigned to either grounding or a placebo that both investigators and volunteers believe to be grounding.

Here’s one study that caught my eye — it showed that subjects grounded for 2 hours significantly reduced the thickness or viscosity of their blood.

Here’s a quote from the conclusions:

“Grounding increases the surface charge on RBCs and thereby reduces blood viscosity and clumping. Grounding appears to be one of the simplest and yet most profound interventions for helping reduce cardiovascular risk and cardiovascular events.”

It’s true that we live in a world swarming with electricity. Our hearts are electric. Our brains are electric. We are the body electric. So in a way it makes sense that we need to be grounded in Mother Earth, but my usual mantra is… show me the data. I have not found a randomized trial with sufficient power to say that grounding affects measurable outcomes. (Randomized trials are the best evidence because they eliminate bias, especially when there’s a potential conflict of interest, such as money to be made by selling grounding pads for your mattress.)

“Earthing doesn’t fix health problems, it just brings your body into proper electrical balance so your body can do the things it needs to do,” Earthing Institute’s Shauna Robitaille says. “People seem to immediately notice an energizing effect. They feel noticeable changes. They tell us, I am sleeping better, I am sleeping longer, I am falling asleep faster, I am waking once instead of five times a night, my varicose veins are lighter, my legs don’t hurt anymore.”

That’s great but it also sounds like a panacea, and I’m holding out for the randomized trials. There’s good data showing a benefit to sleep but it could also be a placebo effect. Of course, there’s no harm in puttering around your garden with bare feet or going for an ocean swim, but I have a higher bar before recommending grounding as a way to health, and certainly before you spend money on the accoutrements that have grown around the grounding industry, from shoes to sheets to mattress pads. That’s right — you actually can buy an earthing mat, earthing sheets and other earthing products to ground you even indoors. These may be helpful for some people, but I am not yet convinced.

I love DIY medicine. Why not just go outside? Run around on the grass with your kids and/or your dog. Wrestle. Garden. Join a group doing Tai Chi or yoga in the park. When it gets cold outside, just slip into a little leather. Yes… shoe leather. Apparently leather soles, if they’re not too thick, can keep you connected to those important earthy electrical vibes.

There’s another catch. Earthing works only while you’re earthing. Go back in the house, you’re unplugged. And it’s like exercise and eating well– you can’t just do it for a week. You have to keep at it to reap the benefits.

Just think about how delicious you feel after a walk on the beach. Your senses tingle. Your skin, your hair, your eyes all glow with the positive charge you’ve just received from the earth. Is it the electrons? The fresh air? The deep abdominal breathing? I’m not sure, but large, randomized trials showing a benefit are what I want prior to recommending the “synthetic” versions of earthing.