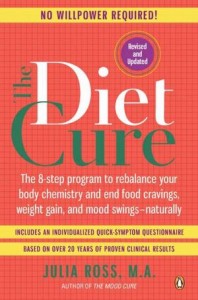 Most Americans are now unable to stop eating refined sweets and starches.

Why? Because these foods are actually more addictive than alcohol or drugs! No joke. Sugar ages you prematurely and feeds the wrong message to your genetic code. Stop the sugar train. As NIDA chief Nora Volkow explained in her April 30, 2012, 60 Minutes segment, the brain’s pleasure and appetite-regulating centers create the addictive response to sugar (and other drugs.) One study (U. of Bordeaux, 2007) found sweet foods to be 4 times more addictive than cocaine! Many other recent studies show similar findings.  (See dietcure.com/research_and_articles.html)

Ross is a 36-year veteran in the addiction and eating disorders treatment fields. For the past 26 years she has been directing programs that utilize the effective brain-targeted nutritional strategies that she describes in the first chapter of the new Diet Cure.  She can describe particular cases from the thousands she’s worked with (or supply clients who can speak for themselves.)

Most Americans are also experiencing epidemic increases in weight and in health problems like diabetes, heart and liver disease, and cancer.

These new weight and health problems are now known to be direct consequences of our increased sugar consumption. Sugar is now thought to be both a highly toxic and a highly addictive substance.  See Robert Lustig, M.D. on 60 Minutes and everywhere else in the media over the past two months since his Nature article, “Public Health: The Toxic Truth About Sugar”, stunned the nation.

Ross’ book addresses these core issues – how to interrupt our cravings for this hazardous but irresistible substance.

Conventional weight loss diets, such as the now popular Dukan Diet, advocate fat- and -calorie restriction, which the typical American overeater cannot sustain for long because of what we know are biologically triggered cravings.  Ross eliminates the food cravings first, then she eliminates the unneeded calories from sweets (and any excessive starch) consumption without reducing the consumption of other healthy foods at all.  The author releases readers from gorgers guilt by explaining that the brain is the problem, not lack of self-discipline! She then explains how brain-targeted nutrients correct the faulty brain chemistry in 24 hours, as she’s been seeing at her clinic for almost 25 years.

(Dr. Dukan* blames the dieter’s lack of “decisiveness” * Ross disagrees with Dukan on many more points she’d be glad to discuss.)

The brain and body rely on certain nutrients to regulate appetite and provide pleasure. Dieters, overeaters, and obese people are deficient in these nutrients. Supplying these readily available nutrients as supplements, is the key to eliminating cravings, overeating, and weight gain.

Dieting has failed but we don’t know how to  replace the yo-yo of under-eating and overeating.

Low-cal dieting has no lasting weight-loss benefits because it strips the brain of its appetite-regulating neurotransmitters, which causes rebound cravings and weight gain.

The brain must be carefully fed! More (not less!) good quality food is the dietary answer; new research, for example, a recent study found that adding snacks helps to reduce weight, (and it certainly helps with blood sugar regulation. )

The Diet Cure’s emphasis on eating lots of healthy food (including saturated fat!) helps deprogram the diet mentality. This is badly needed by the “new” dieters who are chronically skipping meals, fasting, doing cleanses, overdoing low-fat, low-cal, caffeine, tobacco, other drugs, and purging in a desperate effort to minimize the damage of uncontrollable sugar consumption.

Listen to my interview with Julia Ross here.